Here's Pattu's entry for the March challenge. With Pattu, it is very difficult to hold her attention for long. So I had to think of ideas that can get done in less than 10 mins - that was my challenge (besides the fact that I am not particularly creative i.e,).
So, we started by making the paper plate clowns where she had to only stick things on to a plate and boy did she enjoy it! She wanted to convert all the plates in the house into clowns.
What we used for the paper plate clowns: two rings from a toy for the eyes, a red hair band cut and stuck for the mouth and a black hair band cut and shredded for the hair. I did the cutting part while Pattu did the rest as instructed.
Then we found a bath scrub and wrapped it over a ball. We fastened it behind with some hair clips (one of the pics will reveal this :D) and cut out some packing material for the eyes and the mouth. To be honest, we wanted to make a cute looking puppy but this one ended up looking like a forlorn alien LOL! Here too, I helped with the cutting and Pattu did the rest...with a bit of struggle.
The gloves gave us an idea - the dwarfs. Black wool for the hair, black dots for eyes and red painted smile.
Then we rummaged further to find the loofahs - The maiden's dress is a fluffy loofah. We found a hair clip that had the girl. Inspired by that, Pattu's care taker thought of another maiden with a paper fan dress so that the loofah maiden had company. Pattu liked the fan folding...
Then the duckling - that's another loofah with a handle. We found some pegs to go as the eyes and the beak is a pistachio shell coloured red using crayon. Pattu did all of this.
Then we had to make a story around it.... so, there it goes... phew! 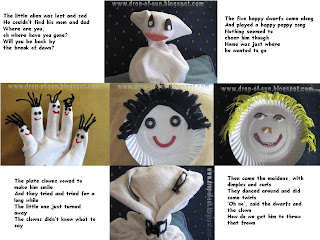 The story is in verse (because I am very lazy) and this is how it goes:

 Slide 2
The little alien was lost and sad
He couldn’t find his mom and dad
Where are you,
oh where have you gone?
Will you be back by
the break of dawn?
Slide 2
The five happy dwarfs came along
And played a happy peppy song
Nothing seemed to
cheer him though
Home was just where
he wanted to go
Slide 2
The plate clowns vowed to make him smile
And they tried and tried for a long while
The little one just turned away
The clowns didn’t know what to say 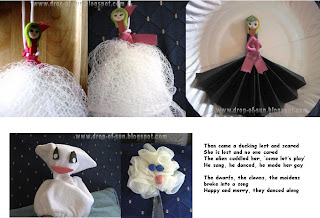 Rest of the story...

Slide 2
Then came the maidens, with dimples and curls
They danced around and did some twirls
‘Oh no’, said the dwarfs and the clown
How do we get him to throw that frown
Slide 3
Then came a ducking lost and scared
She is lost and no one cared
The alien cuddled her, ‘come let’s play’
He sang, he danced, he made her gay
The dwarfs, the clowns, the maidens broke into a song
Happy and merry, they danced along
So, that's that....
Posted by Uma at 7:24 pm

Wow...that is really creative Uma! And a lovely story that! Hats off to you and Pattu!

What do you mean you aren't creative? All of that looks really good to me.

Seriously, stop calling yourself non-creative. That poem is super cute.
Reminds me of one my sister wrote:
Up in the sky is the moon
On its back it had a koon (tamil for bent back)

superb stuff - so creative! i am going to do this with anush as well

They are lovely. Thanks for sharing them. I'll put up the pics very soon. :)

its so unique and beautiful.using things lying around the house is PRETTY CREATIVE :) n the story , the poem simply superb. way to go,Pattu and mommy.

And you call yrself non creative ?

Hopped in from Lavanya's blog and loved it. "besides the fact that I am not particularly creative" is the understatement of the year:-)

very well done Uma and Pattu!! loved them all..

TPL - Up in the sky is the moon
On its back it had a koon - ROFL!!! I hope she hasn't stopped writing..LOL!

Wow, good work. After seeing the pics,poem and write up, don't be surprised if you find parents queuing outside ur house to get their children enrolled in a creative workshop held by you and pattu.

Asha - that's so flattering :D thanks!

THIS is what people make whne they are NOT creative!! awesome stuff! :)

Fresh from our garden