How would you react?

Some statements/ situations/ questions that have made me go aarrrgggghhh....

Now, I'm inviting you all to give me your best retorts/ responses to the following aarrrgggghh statements/ questions/ situations... and do share some that you might have come across..

1. At an interview to a single woman: When are you getting married? To a married woman: Are you planning a family in the near future?

2. Two male colleagues discussing the absence of another male colleague:
C1: "He left early (which was well past official timing anyway)... he had to take care of his kid"
C2: Looking surprised, "What does his wife do? Already henpecked is it!" sniggers

3. At a ribbon cutting ceremony, a young woman is approached by a male colleague
MC: Making it sound like it is some great honor "We need a young woman like you to greet the chief guest .."(hold a tray and offer the scissors)
The irked young woman refuses and the man turns to another not so young woman in desperation. There are atleast 30 men - young and not so young at the ceremony!

4. Male colleague sharing lunch that he had cooked. Another MC - "That's the plight of being married to a working woman"

5. Perception that women who drink/ smoke have 'loose morals'. On many occasions, I've heard comments such as, "She drinks and attends late night parties, so obviously...(men misbehave)"  And almost always it sounds like it is the woman's fault and not the man's.

ETA: Asha pointed to Saalumarada Thimmakka whose selfless dedication to planting hundreds of trees and also tending to them is truly inspiring.

Here's my entry for Feminspiration

These are couple of women I met during some of my social research trips. Their faces are etched in my memory and these are among a few women who have taught me a thing or two about life.

I met Ponni during my trip to rural Ooty. She lived alone with her son (an adolescent when I met her). She had a charming, friendly face and readily invited me for a chat. I didn't quite understand the stares and disapproving looks that I got from people till I heard her story.
The usual story - she fell in love with a man, had a child out of wedlock and he left her for an arranged marriage. Ponni came from a poor, dysfunctional family and was turned out of the house since she has brought shame to her family. She was a whore, an outcast. She crumbled and suddenly she was alone in this world that was alien, unfriendly and dangerous. One fine day she just decided to gather herself and make an effort to make the best of the situation. She found a job on a farm that gave her food and shelter. She decided to educate her son for which she had to work harder and also offer some favours in exchange. She is happy that her son is progressing well at school. She has no secrets and she is not ashamed of her life. Her days of self pity are over. She is officially an outcast in the village, but women in their suffering come to her secretly to borrow money or to just cry on her shoulders. Her son is the center of her universe now but she seems to know that she will end up lonely. She does not expect her son to acknowledge her struggles or even understand her. A stray tear appears when she thinks that he might even turn against her and call her a whore. She is preparing to face the world as a lonely old woman. Her wisdom comes as a shock through her bubbly, youthful, girlish charm. She laughs liberally and it is infectious.
I hope, for Ponni's sake that her son has grown up to be supportive and understanding.

Amina worked hard to make ends meet while her husband came home drunk and beat her up. She decided to educate her two girls so that they can have a liberated life. The girls started going to school and she face opposition from men and women folk alike. Her husband had more reasons to beat her up - she was training her girls to bring shame to the family. The girls were threatened and were on house arrest. Amina was not one to give up. She found help in the form of a volunteer who came home to teach the girls. The girls would give their exams when they are ready. Amina is not sure if the girls would be allowed to work, but she believes that the education will liberate them, make them independent in thought and they will be ready when an opportunity presents itself. If none of these happen, they would still understand the value of education and pass it on to the next generation - maybe her grand daughters would be the real independent women that she so wants to be. But Amina knows that she has sown the seeds and it will bear fruit some day and that day is not far.

I so want to meet these women now - it has been 10 years. I want to believe that they are still going strong and are proud of their achievements.
Posted by Uma at 10:48 am 6 comments:

.. was sipping African Bush Tea and thinking about Mma Ramotswe.

She is one of the characters that I've grown to like in recent years. I specifically remembered the part where Mma Makutsi one fine morning decides to brew the regular tea instead of the ususal bush tea. It is an awkward moment between the women where Mma Makutsi doesn't want to hurt her benevolent boss and Mma Ramotswe is a bit embarrassed when she realises that she has never bothered to find out if everyone else was ok with bush tea.

Anyway, I really liked bush tea (at least if that would put me in the league of Mma Ramotswe). For those who would like to try - it is available in the Twinings brand. In Chennai you should find it in Nuts & Spices and Brown Tree chains.

While on the subject of inspiring women, have you participated in Feminspiration at Womensweb yet? Contest on till 16th March and some nice goodies too... check it out.
Posted by Uma at 10:06 am 4 comments:

Attacked by the Green Eyed Monster

We were at a restaurant and Pattu was staring for a long time at a girl at the next table who seemed just a bit older than Pattu. While I was wondering about that, Pattu turns to me and asks, "Amma, isn't pink my favourite colour?". Still confused, I agreed and Pattu says with a frown on her face, "..then why is she wearing it!"

And this is also the first time I'm sensing 'envy' in Pattu's reactions...

Pattu's school has exams and they also give a report card at the end of it. I generally boycott this system by not acknowledging the time table and not 'preparing' Pattu to face the exams. She goes to school like any other normal day. After her drawing and colouring exam:

Amma: What did you draw today?
Pattu: A hill and an ant on top of the hill
Amma: (Who has her doubts since she's never ever seen Pattu draw anything like that before) Did you colour?
Pattu: Yes amma... I coloured beauuuuifully... so verrrry beaauuutifully amma
Amma: (with heightened suspicion) within the borders?
Pattu: Yes amma... only little bit...juuusssst a little bit went outside the border..

The report card arrives and madam has a 'D' for drawing and colouring!

Email ThisBlogThis!Share to TwitterShare to FacebookShare to Pinterest
Labels: Pattuspeak

We visited the Perarignar Anna Centenary Library at Kotturpuram. The children's section is beautifully done. It has a lot of natural lighting and has bright cheerful decor. They are still adding to the collection of books. What we saw there included a lot of Scholastic, McGraw Hill and Oxford publication with some stray Tulika and others thrown in.


Pattu enjoyed reading a GIANT book - which was half as tall as Pattu
Hatty and Tatty and the bumping boats
Pattu Rating: 4.3
Two best friends Hatty and Tatty decide to get married and the story is about how they miss each other while on the way to the other's house. Finally the bump into each other mid way ... a simple and yet a cute one 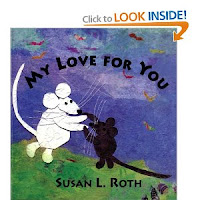 We also read the really beautiful book called,
My Love For You
Pattu Rating: 4.0


Then we read, rather I read (while Pattu wanted to flip through some books on her own) another nice book called


Grace and Family
The story is about Grace who lives with her mom and grannny in UK. She thinks that her family is short of perfect without a dad because all the families in stories she has read has a dad and mom, a brother and sister and a cat and a dog. Just then, she receives an invitation from her dad who now has another family in Africa. She decides to go accompanied by her granny and finds both joy and sadness during her stay. By the time she is back, she is all set to rewrite the myth of a happy family to include families like hers as well. Good thing about the book is that it doesn't ask for sympathy.

Fresh from our garden